UK tradespeople are optimistic about the future, with 82% expecting business activity to remain at the same level or grow over the next 12 months, additionally, nearly half (45%) report being busier than last year. However, research conducted by trade retailer, Screwfix, has revealed the majority (57%) are reporting difficulties in recruiting staff to support them. This is primarily due to:

For those who struggle to recruit skilled employees, more than one third (37%) believe it is because apprenticeships are not given the same level of respect as a university education. Furthermore, 31% say poor public perception of a career in the trade means school leavers are not interested in pursuing a future in construction.

The research, conducted as part of Screwfix Trade Pulse*, a monthly index of more than 500 UK tradespeople, also revealed strong work levels across the trade at the moment, as nearly one fifth (18%) of tradespeople has more work than they can handle and 40% are quoting for more jobs than 12 months ago.

Nearly all (94%) tradespeople said they would recommend a career in the trade and of the reasons why, 85% say they have a strong sense of achievement when a job is done and, 80% enjoy seeing the results of their hard work.

More than half (57%) of those surveyed said they started as apprentices and, when it comes to increasing the numbers undertaking trade apprenticeships, more than one third (35%) believe greater focus is needed on vocational education in schools. More than one quarter (26%) believe improved awareness about the opportunities offered by a career in the trade would drive greater uptake of apprenticeships, with 19% saying that reducing red tape for employers looking to hire an apprentice should be considered.

The research also looked at views around those entering construction at a later stage in their careers. The significant majority (82%) of tradespeople think more could be done to attract people to the trade further into their working lives. More than two thirds (69%) think increasing awareness of the opportunities available would help attract people into the trade and 61% believe greater knowledge of the support available to retrain is also crucial.

Graham Bell, CEO of Screwfix, comments: “When we speak to tradespeople across our 533 stores, they reflect what these findings show us. Tradespeople tell us they have full work diaries but, many struggle to recruit skilled employees when looking to support their growing business so, it is clear that focused efforts are needed to drive recruitment and training into the trades.

“There is much focus on a reported construction skills challenge with various reasons given including loss of talent during the downturn and a lack of new entrants joining the trade. That’s why, now more than ever, all parties including government, suppliers and education providers should work together. It was encouraging to see the investment pledged into improving construction skills by the government in the recent Budget but, collectively, we also need to demonstrate why construction is such a great sector to work in and, help those who may be interested in embarking on a career in the trade to overcome barriers they may face.  We also need to support tradespeople who want to take on apprentices or hire skilled labour to support their business at a time of much opportunity.”

Screwfix supports the trade however it can, so alongside practical support such as opening a store at the rate of one per week, to bring Screwfix even closer, it offers ‘Your Guide to Hiring an Apprentice’, a free, bitesize guide available in stores for those tradespeople who may be looking to take on an apprentice. To further shine a light on those hardworking new entrants to the trade, it also holds an annual Trade Apprentice competition where a £10,000 business start-up kit is up for grabs. Both this award and its Britain’s Top Tradesperson nationwide search showcase what a great career option the trade offers, whether you start out as an apprentice or retrain later in your working life.

In addition, to support skills growth in the construction trade, Screwfix has recently started to work with colleges directly, partnering locally first with Yeovil College. It has invested in the Screwfix Trade Skills Centre, a new purpose-built site for students studying the pilot Screwfix Trade Academy course, which covers bricklaying, plumbing, carpentry and electrical contracting. The first recruits started in September 2017.

Screwfix is also looking at other ways it can support the trade and will be launching further initiatives in the future. 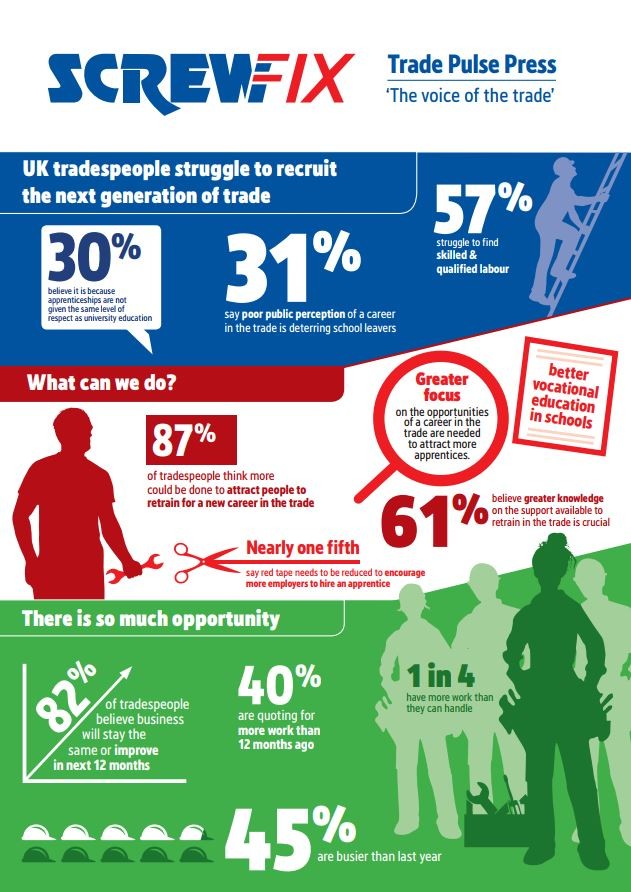 Screwfix Trade Pulse is a monthly index which surveys more than 500 UK tradespeople to track work levels and optimism among the trade.  Nearly 250 tradespeople were also surveyed on special topic areas including skills and availability of labour. The retailer undertakes the research to gain greater insight into the needs of its customers to ensure it provides the services and products required.